International Labor Day is an ideal occasion to reflect upon work conditions, and especially, the problem of unemployment, particularly acute in some European countries such as Greece and Spain. 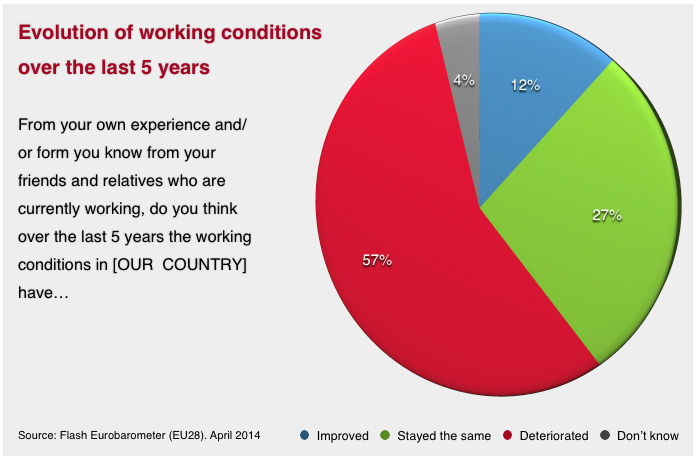 Looking more closely, the numbers differ from one country to another: While 87% of Danish and 84% of Finnish workers say they are satisfied, on the opposite end of the spectrum, an approximately equal amount of their counterparts in Spain (86%), Italy (85%) and Portugal (78%) say their conditions have worsened.

Take Spain’s case. According to data published at the end of April, the Economically Active Polulation Survey (EAPS), the active population – meaning people who are working or actively seeking employment – has gone down by 400,000 in one year:

Most of the figure is attributed to people who have ceased looking for work or those who have left the country, both Spanish citizens opting to emigrate and immigrants living in Spain who decided to return to their home countries. In addition, there are close to six million unemployed, two thousand more than last year. Relating these two figures leads to an unemployment rate of 25.93%, the highest in Europe after Greece.

There are several conclusions we can draw from these statistics. The following three are worth noting:

Job creation is so complex and so urgent that it rationally demands the involvement of all social agents and the implementation of a series of measures on several different levels. Most of the solutions that are on the table tend to combine legislative and economic measures, both on the part of business owners so that they can create conditions that are favorable to job creation and on the part of unions to ensure workers’ rights.

These approaches are necessary in order to tackle the problem. Yet there is a third, crucial aspect that I would like to highlight which has more to do with a mindset shift. Such a shift essentially requires all the parties involved to place themselves in the shoes of those affected. In the end, as our classic ancestors said, “quidquid recipitur ad modum recipientis recipitur.” In other words, whatever is received is received in the manner of the receiver. You can literally consider containers that are filled with water: Water takes the shape of the container that holds it. Applied to the matter at hand, legal norms and economic incentives should be used according to the intention of those who will apply them.

Let’s look at an example. My colleague Prof. Sandalio Gómez recently argued (here, in Spanish) in favor of temporary work contracts as a tool to generate employment. He pointed out that the problem in Spain is that this type of contract is associated to low-skill jobs with limited possibility for promotion. If unions feel that these types of jobs are precarious and offer inferior work conditions, and if companies think that workers will be less productive and feel less committed, logically this type of contract is doomed, or will be used opportunistically. Yet, as Sandalio points out, in Holland temporary work contracts make up 49% of employment, the highest rate in the world . There they have had a favorable role in fostering job creation without affecting productivity or workers’ commitment to their employers. It all depends upon how and with what purpose they are implemented, as our classic philosophers aptly stated.

And so how can this mindset shift take place? I would like to cite another colleague’s ideas. Alfredo Pastor published an op-ed piece a few days ago in a special dossier that the journal Ara dedicated to the future of capitalism. In his article, Prof. Pastor proposed the civil economy as an alternative to the market economy and the principles that characterize today’s capitalism. Studying authors who have written extensively on civil economy, Pastor underscores two features that are very relevant to employment:

1. The first is a shift in the understanding of the overall purpose of economic activity. And I would also add, the ultimate ends of business activity. The objective should not be the predominant approach today, which is the maximum well being possible, but instead, the maximum personal development possible for each individual within society.

The well being of the collective is what we call the common good, which is in fact the benefit of coexistence. From this point of view, one should be willing to sacrifice part of his or her own well being if doing so contributes to the common good . This is certainly in stark contrast to individuals seeking their own self-interest in the hopes that in doing so the free market will distribute the gains among the entire system’s participants. The social agents involved should approach the problem of unemployment with a sense of solidarity , willing to sacrifice part of their own interests. The first order of business for everyone – also for companies – today is to generate employment.

2. The second feature of this perspective, if we focus on the division of labor, also involves a mindset change. This would place reason not on the side of productivity, the dominant logic today, but rather on the need that each individual has to work. In addition, this shift acknowledges that each person is different and therefore needs tasks that suit their abilities because that is how he is she will be able to develop as a person. From this point of view several things become clear: Not only the economic cost when employment is scarce, but also the anthropological cost for those who are not able to develop their capabilities because they are lacking the job to do so. And thus the gravity and urgency of the problem go without saying.

Who is Picking up the Tab for the Financial Crisis? Is it Fair?

Smart Ways to Give Voice to Your Values at Work